Hearing aids worn in the ear are usually custom-fit, based on a cast or impression of the ear. They’re available in different skin tones to camouflage with the outer ear. There are several styles – each is listed below, ranging from smallest to largest.

The smallest custom style, IIC instruments site invisibly in or past the second bend of the ear canal. IIC are specifically designed for mild to moderate hearing loss.

ITC instruments sit in the lower portion of the outer ear bowl, making them comfortable and easy to use. Because they’re slightly larger than CIC models, they have a longer battery life, and can host additional features such as directional microphones for better understanding in noisy environments, and controls such as volume controls. They fit mild and moderate hearing losses.

Half shell models fill half the bowl of the outer ear. Like ITC models, their size enables the addition of features such as directional microphones, volume controls and push buttons to activate special settings for different listening environments. Because of their size, they may be easier than smaller models to handle for some people and yet are still often disguised by hairstyles or sideburns. This hearing aid style looks similar to the ITC hearing aid when worn on the ear, but is slightly larger.

Full shell models sit flush within the outer ear bowl. Their size allows the maximum number of additional controls and features such as directional microphones, which require space on the outer portion of the instrument. They use a larger battery size than the smaller styles, and can fit a larger receiver with enough power for even some severe hearing losses. Because of their flexibility, they’re widely recommended for mild to severe hearing loss. 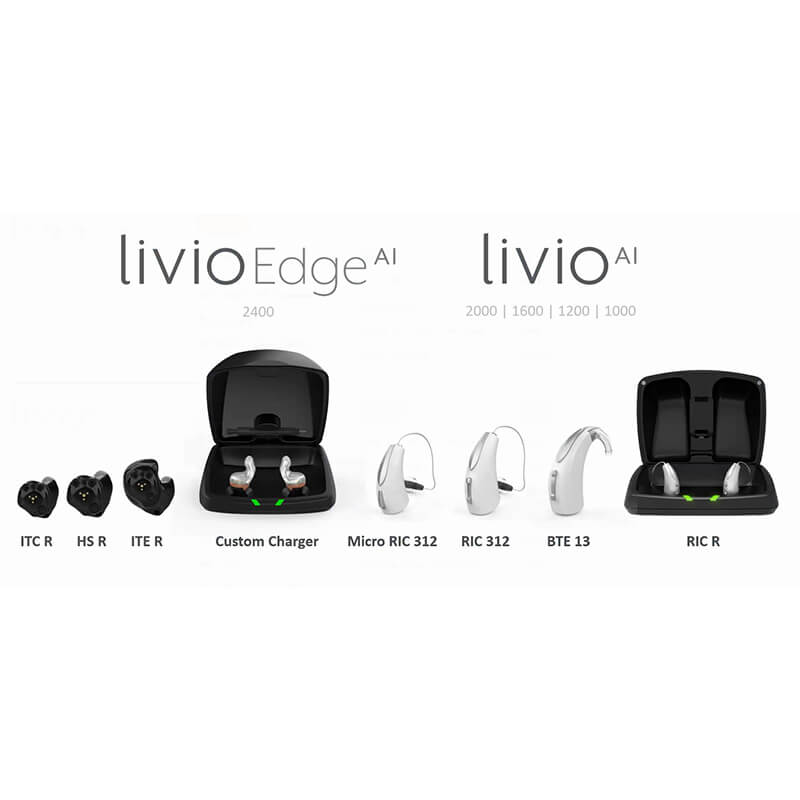 Behind-the-Ear (BTE) models sit behind or on top of the outer ear, with tubing that routes sounds down into the ear that connects to an ear tip or earmold to secure them in the ear canal. BTEs come in colors to blend with hair or skin tones, and even chrome colors, leopard print and other funky designs to suit personal styles. Different BTE sizes accommodate different features, controls, battery types and degrees of power (larger instruments generally have more power than smaller ones). While many people choose discreet BTEs that are unnoticeable when worn, others are tempted to show off the cool designs.

Mini BTEs are designed to hide behind the outer ear, and have ultra-thin tubing to discreetly route sound into the ear. The tubing connects to a soft tip that sits in the ear canal but doesn’t occlude it. The result is a natural, open feeling as airflow and sound enter the ear naturally around the tip, while amplified sound enters through the tip. This is known as “open fitting” and is recommended for mild to moderate high frequency losses.

Receiver in the ear (RITE)

RITE models, also known as RIC (receiver-in-canal) models, are mini BTEs that have the speaker of the instrument incorporated in the ear tip, instead of in the main body of the instrument. RITE instruments fit mild to severe hearing losses. This hearing aid style looks similar to the Mini BTE when worn on the ear.

BTEs with earmolds fit mild through profound hearing losses. Their longer shape, following the contour behind the outer ear, generally can house more features, controls, and power than custom models. The earmold color and style, as well as the wearer’s hairstyle, determine exactly how they’ll look on each person.